Lelein Kanunga sits under a huge tree with his fellow morans in the small Dakalali village in Magadi, Kajiado County. On the stem of the tree, Kanunga, the leader of the Entasopia moran group has stuck a white manila paper. He is taking the team through a girls empowerment programme.

“I will be remembered for ending female genital mutilation in Magadi,” says a confident Kanunga after a session with 17 morans. The group of young men meets every Saturday to discuss and find solutions to issues affecting girls in the area.

Although he had always been vocal about the rights of women in his village, 28-year-old Kanunga intensified his campaign in 2013 after undergoing a training conducted by Amref Health Africa the same year. The father of three was trained as a peer educator for Maasai morans under Amref’s Sexual Reproductive and Health Rights programme in Kajiado County.

The team of 17 has vowed to protect the rights of girls and women in the area. According to the United Nations Children Education Fund (Unicef), 23 percent of Kenyan girls are married before the age of 18. This is not news in Entasopia. Kanunga says that early marriage is a norm in the area. “But as young men, we have stated our stand on this. 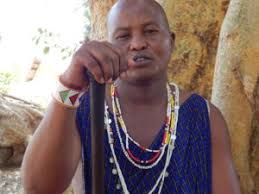 As a team leader, Kanunga has ensured that none of his sisters has undergone female genital mutilation and consequently early marriage. The father of three is in charge of more than 700 morans in his community.

In a highly cultured community, the efforts by the morans to promote the rights of women seem to bear fruit. “But it takes wisdom. When we learn of a man wanting to marry off his young daughter we approach the matter with wisdom. We first send a peer of this man then follow up with a formal visit to his home and share our concerns,” explains Kanunga.

Besides, the team uses the various success stories to convince the father of the girl. “When the man sees that his peers have changed their stand on early marriages or FGM, he is more likely to change tune too,” says Kununga. If not effectively addressed, United Nations Population Fund (UNFPA) estimates that by 2024, 140 million girls will be married before their 18th birthday.

Jeremiah Oromoi, a peer educator in Entasopia says he has more confidence in girls, adding that it the reason he joined the war against violation of their rights. “That is because whenever you educate a girl, she is more likely to come back and help her parents. And I have witnessed this here,” says Oromoi.

“I never went to school because my father gave me a girl to marry at a young age. This meant that I had new responsibilities and had to first attend to my family.” Through his advocacy efforts, Oromoi has seen his two younger sisters escape the cut and continue their education.

1 week ago Impacthub Media
× Talk to us!