Professor Ng’ang’a Wahu-Muchiri is a household name in the University of Nebraska-Lincoln, the oldest public university in Nebraska State in the United States of America. The assistant professor of English at the institution does not shy away from talking about African history during his lessons. Though a Kenyan by birth, Ng’ang’a’s grasp of the history of other African cultures is striking.

According to the Engineering and English Studies graduate from Lafayette College in Easton, curiosity to understand others’ worldview prepared him for his work today. Growing up in Kenya’s Kajiado county, Ng’ang’a would be woken up by the call to morning prayers by Muslim faithful in a nearby mosque. Although he was not a Muslim, this alerted him of the existence of a different religion.

Ng’ang’a later joined Aga Khan High school. Here, he interacted with students from the Ismaili community, Islam and other diverse cultures and religions. This, he says, prepared him for diverse views, increasing his inquisitiveness and leaving him more eager. From a perspective of curiosity, the now Assistant professor of English says he has always been excited to see how different cultures interact with one another. 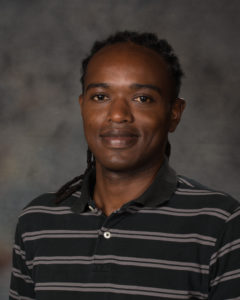 With over 50 countries in the continent, Ng’ang’a says it is almost impossible to define what Africa really is. Once you land in the continent, you realize there are thousands of ways of being African, “as there are many ways of being, for instance, a Kenyan or an Ethiopian,” he says. In order to demystify the wealth in Africa’s cultural diversity, the Kenyan-born professor of English would take the path of telling the African narrative through creative non-fiction writing. This has earned him several accolades including the Honourable Mention, Benstock Dissertation Prize University of Miami – 2016 and Best Graduate Student paper – African Literature Association -2013.

Besides teaching at the university, Professor Muchiri has specialized in telling the African narrative using poetry, photography and writing. A lot of his work is in history. He is also a public speaker and entrepreneur. Although he initially trained as a chemical engineer, Ng’ang’a also attained his Master’s and PhD in English at the University of Miami between 2009 and 2015

Some of his publications include; Writing Land, Righting Land: Literary Interventions In E. African Property Rights, an up-comingbook that highlights the complex interactions between African artistic production, land rights and rural poverty, and The Memory of That First Illicit Love-A memoir.

According to Ng’ang’a, there isn’t a fully complete African narrative and whoever tries to define what Ghanaian, Ethiopian or Kenyan is, is playing with divisive identity politics. He opines that the African narrative can be told using words, pictures and videos.

The founder of Nmuchiri Photography and the Rift Valley Museum of Photography, an online gallery, has published four photography books, documenting certain aspects of the African continent through pictures.

Ng’ang’a’s love for photography began in high school, but truly developed while in his fourth year at Lafayette. “Here, I would design my own projects. I would do self-portraits with a timed camera then stick them on my wall.” He would also take photographs of international students in their national attire. After college, Ng’ang’a wanted to build a huge archive of photos. “I would do as many as 300 pictures in a trip. Today, his online gallery has over 84,000 photos.

Some of his published photography work includes Maua: Flowers by Nature (2012) and a photobook on clouds (2014). Other portfolios include one on Miami’s architecture, a photo story of his journey to Mt. Kenya’s Lenana point, and  Photo-Journey in Ghana: The Land of Gold (2017). All the books are available through www.riftvalleymuseum.photography. Muchiri envisions at least 100 museum spaces across the continents using photography.

He hopes to establish a movement that stands for transparent campaign financing, inclusive reproductive health rights, a more rehabilitative criminal justice rather than a punitive one, real land reforms, and a place where everyone is guaranteed an income.

Tecno rewards over 50 consumers in “TECNO TAKE ME HOME’’ campaign