Giving a second chance to teenage mothers in Samburu county

When 14-year-old Dinah* got pregnant early 2018, she dropped out of school; hopeless and confused about her education. She was then in Class Six in Logorate Primary School in Samburu East. From the experience of her peers, Dinah knew her career had hit a dead end. She would give birth later in the year.

Dinah is just one of the 777,000 teenage girls globally below the age of 15 who give birth each year. Many of them drop out of school to take care of their babies. According to World Health Organization, at least 10 million of the teenage pregnancies in developing countries are unintended. In some communities, however, stigma keeps many of the girls out of school as they are ashamed to resume learning.

But Dinah’s story was different after her school accepted her back. “I resumed school in the first academic term of 2019 and now in Class Eight,” says a jovial Dinah. Her mother, she says, encouraged her to go back to school.

Through Binti Shujaa program, an initiative by Afya Timiza, a USAID funded project seeking to reintegrate teenage mothers to formal school system, Dinah, together with tens of other girls have gotten a second chance in their education. “Although I passed through a challenging time as a teen mother, I encourage other young girls that there is hope after pregnancy,” she says.

John Lekamparach, assistant chief in Logorate sub location blames stigma for high school dropout rate by teenage mothers. “When girls get pregnant before marriage, they would be excluded from all activities in the community, including political and community dialogues,” said Lekamparach. these girls are left out.”

The assistant chief was compelled to offer a solution to the girls who, he observed, were being punished for getting pregnant while in school. “I spoke to community members on the need to give the girls a second chance. Many of them have accepted.” As a result of his efforts, Lekamparach says 10 girls who have so far gone to colleges and polytechnics after resuming school. Some are pursuing beauty courses, sole businesses. “One is in Form Four this year and we are optimistic that she will perform well,” he added.

In order to sustain themselves, The Binti Shujaas have formed a self-help group that has been registered with the government with the aim of equipping them with life skills to apply for business loans, starting businesses and earning a livelihood to support their families.

Lydia Ogutu, the Afya Timiza  project officer in Samburu Central says the Binti Shujaa concept is aimed at rehabilitating school going mothers to return to school and at the same time empowering adolescents girls and young women with knowledge on sexual and reproductive health and ease access to sexual reproductive health services. 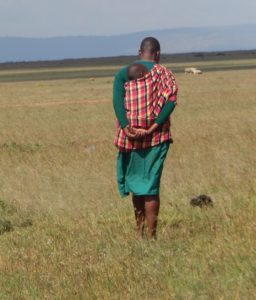 The girls in the Binti Shujaa program have a merry-go-round kit where they have saved upto Sh32,000 now. They plan to open wholesale shop called Binti Shujaa Logorate. The chief lauded the impact of the initiative, saying it has seen many girls go back to school and become more confident in life. “We have seen significant drop in teenage pregnancies in this sub location. In the last three years, there has been only one pregnancy in this area,” he said.

Peter Lemuna, headteacher at Logorate Primary School says the institution recorded increased enrolment of girls as a result of the Binti Shujaa initiative. “In the last three years, the enrollment of girls has continued to increase. Last year, we had 70 candidates in total; 37 boys and 33 girls. The gap is quite small compared to the past years. This year we have 35 girls registered to sit the 2020 Kenya Certificate of Primary Education (KCPE) examination, higher than the 24 male candidates registered for the same examination. This is a big milestone to our community and particularly to the girls,” says Lemuna.

NB: Names have been changed to protect identity

Six days to go: Place your order now and earn yourself a gift