To Jane Manang’oi, living with obstetric fistula had alienated her from many social activities. For over 18 years, Jane lived with the condition that according to the World Health Organization, affects about two million women in Africa and Asia. In Kenya, the condition is estimated to affect 1,000 women every year.

A visit to the dentist about four months ago introduced her to the Narok Referral Hospital fistula repair department. “I had taken my child for regular dental check-up when I heard of the fistula camp,” says the mother of four. Without hesitation, Manang’oi went for the surgery three months ago. Her life is now back to normal and she can engage in her daily chores and mix with other women without any stigma.

In order to fast track the treatment of fistula while restoring dignity to the affected women, UNFPA Representative to Kenya Dr Ademola Olajide says the agency is working with national and county governments to strengthen maternity and overall reproductive health services while ensuring relevant information. “We are so glad that we are able to work with the Narok County Referral Hospital where services have been provided to at least three fistula survivors in spite of covid-19. We are trying to see how we can scale up access to such treatment facilities across Kenya so that women from hard-to-reach communities which can also have access to services,” Ademola said. He reiterated that UNFPA is also working with community based organizations and civil society organizations to reach into the community in order to increase awareness of fistula treatment while ensuring access even at the remotest parts of the country.

Dickson Miruka, a fistula nurse at the Narok County Referral Hospital says early marriage and female genital mutilation largely contribute to cases of obstetric fistula in the area. “The community that we are living in does total female genital mutilation. This tampers with the reproductive organs. As a result, it is easy for mothers to have tears during delivery,” says Miruka.

The high rate of teenage pregnancies, he adds, increases the risk of fistula-related complications as the girls’ reproductive systems have not fully developed. “For them, when it comes to child birth, they tend to have complications. One of such complications is fistula. This is because they tend to shy from CS at that early age.  As they struggle to have a normal delivery, the end result usually is a probable fistula,” said Miruka.

Sheilah Kiwapi, 21, suffered obstetric fistula in 2017 after giving birth to her first born child. She taken to Longisa Hospital for treatment but later transferred to Kisii Level 5 Hospital where she was admitted for two months before being transferred to a hospital in Eldoret. “But my condition did not improve so I came back home. I later gave birth to my second child in 2019. Immediately after, I experienced the same problem again.” But Sheilah is among the three patients who underwent surgery this week at the Narok Referral Hospital. 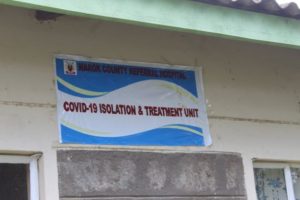 The hospital has embraced the huge network of community health workers as well as radio announcements to get fistula patients for treatment.

According to Dr Otulo Carrey Francis, a fistula surgeon at Narok County Referral Hospital, the facility has so far conducted 45 fistula surgeries in partnership with Fistula Foundation, with almost 100 percent success rate. Everlyne Shani is one such patient. A visibly jovial Everlyne sits on her bed at the hospital’s ward. The mother of three underwent fistula repair yesterday. She suffered the condition three years after the birth of her third born child. “I am happy my husband has always walked with me and did not neglect me,” she says.

Her husband, Wilson Shani stands next to her at the hospital. He has stood with his wife since she developed the condition. After staying with the condition for three years, Wilson and his wife heard of a fistula repair treatment at the Narok Referral Hospital. Previously, the couple had been referred to Eldoret then Kisii. But both areas were far for the couple. But determined to see his wife well again, Wilson accompanied his wife to Kisii Level 5 hospital where she successfully underwent fistula surgery. “But the condition recurred after

my wife engaged in farm chores back home,” recalls Wilson. That is when we were referred to Narok County Referral Hospital. My wife underwent a successful surgery and we are happy,” noted Wilson.

Wilson urges men not to neglect their spouses who suffer obstetric fistula. He, instead, urges them to lead the treatment process and ensure proper support for their spouses.

According to the World Health Organization, between 50,000 and 100,000 women globally are affected by obstetric fistula every year.

As a result of covid-19, however, fears that the progress made in the past eight months in partnership with Fistula Foundation are likely to be reversed by the effects of the disease. “An entire fistula ward has been closed and converted to an isolation centre. As a result, I am not in a position to do as many surgeries because we have only one theatre that handles other cases. As a result, there is no special priority given to fistula cases. Hence, we now do an average of two cases per week,” he added.

A Kenyan entrepreneur fights deforestation with a new energy solution

African Development Fund approves $9.52 million to enhance coordinated COVID-19 response in East and Horn of Africa and the Comoros

2 weeks ago Lilian Kaivilu
× Talk to us!