When Renee Ngamau the chairperson of Amnesty International Kenya Chairperson started fighting for public playing grounds and open spaces, she had no idea the impact it would have.

One thing she was sure of was that she would face stiff opposition from individuals intent on putting up private developments on public land.

She was not wrong.  Last month Ngamau, the chairperson of the Jamhuri Phase one Residents Association was arrested when she mobilised residents to hold peaceful protests to oppose the private development of a piece of land set aside as children’s playground. Around 11 police officers stormed her home in the middle of the night and arrested her. However, the next day Renee was released without charge.

“The Office of the Director of Public Prosecution recommended that the Independent Policing and Oversight Authority (IPOA) investigate the arrest terming it abuse of public office. The police had no intention of charging me. They just wanted to brutalise me,” she said.

The impact of Ngamau’s work has had a far reaching impact and she was over the weekend feted for her efforts to defend public playing grounds and open spaces. 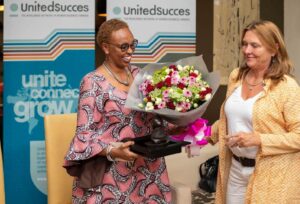 Ngamau was awarded the United Succes Global Award dubbed Women Moving Mountains in recognition of her efforts to keep a private developer from grabbing public land in the estate set aside as a playing ground. The Masters degree holder in Financial and Banking Law from the University of London said she was inspired by residents who were willing to fight for what they believed in.

“ I dedicate this award to each of the members of the leadership of Jamhuri estate committee for your commitment dedication, bravery, vision and leadership and to the residents of Jamhuri Estate for their steadfast refusal to accept intimidation by land grabbers and their dedication to the preservation of green spaces,” she said.

“ I felt vindicated that the work our committee is doing has received global recognition.  We are not alone in the fight to protect playing fields. The truth is the fight for public spaces and playing fields is often unseen, but there are many residents groups in Langata, Kitisuru, Muthaiga, Mathare, Kariobangi and other estates who are putting in a lot of effort to get back grabbed public spaces,” she said. 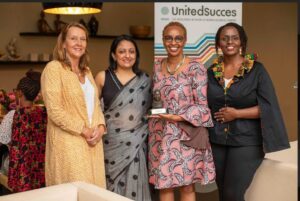 Ngamau said children deserve a space to play and it is wrong to allow grabbers to take over land that has been designated as open spaces for them to play in.

“ Children should not be playing in between cars and apartments or watching TV the whole day because they do not have a safe space to play. This is affecting their eyesight and cognitive abilities. They deserve the dignity and right to have a space to play.  Children are not a nuisance and the government should take action against those intent on grabbing playing grounds,” she said.

The award, she said, has given the fight for playing fields and open spaces a global platform and sends a strong message to those in authority that they cannot continue to ignore the voice of residents.

“ This is not a solo action. We have heard people saying that hii nchi inokana wenye (The country has its owners). We want the land grabbers to know that we are not second-class citizens because we do not have the money to fight them. Kenyans are getting tired and want to send a message that Kenya iko na wenyewe na wenyewe ni sisi (Kenya has owners and we are the owners),” she said.

Ngamau said several resident associations have reached out to her complaining about grabbed playing grounds, community land, issuance of dubious titles, lack of public participation in planning processes and police abuse of power.

“ We are putting together a secretariat of residents association because many people are tired and they want to do something about land grabbing,” she said.

In addition, Amnesty International Kenya has started an initiative called circles of conscience that brings together individuals who are dedicated to justice and human rights for all.

“ We educate people on their rights so that they know how to speak up for themselves. We have a response mechanism that is triggered when our members need help. Some of our members include lawyers, doctors and members of residents associations, Community Based Associations. Anyone can become a member and they are issued with an Amnesty International card,” she said.

Ngamau, a lawyer has vowed to continue with the fight to protect public playing grounds, saying failure to provide safe spaces for children to play could have far reaching implications on their physical and mental health.

“People should not be scared to fight for public spaces because it is their right to ensure their children explore their creativity. Children today are spending too much time watching TV or online and are not allowed to go out in the sun and play because there are no spaces for them to do so,” she said.

Why I started an art business in my mother’s balcony