About 10 years ago, the few public toilets in the city were a no-go zone. Street children had literary taken them over and that is where drugs were being peddled. Once you entered the stenchy room, welcomed by urine flowing to the outside of the dingy structure, you had to buy the drugs while you liked it or not. Otherwise you would leave your wallet behind.

The situation was so bad that one had to condition themselves when leaving home because visiting a toilet was the worst nightmare for any Nairobian. Unless they were visiting a hotel or an office with toilets, people would even shun drinking sodas in town since there were no reliable facilities in the city to relieve themselves.

Pavements and minor streets within town had been turned to toilets and stench was the order of the day within the central business district. This trend irked David Kuria an Ashoka fellow, who was then an architect at the Nairobi City Council. His move seven years that made him start the ikotoilet model would later be a source of decency in the city’s sanitation.

Although Kuria knew it was the government’s responsibility to provide proper sanitation in the city, he was determined to partner with the government and see how the whole idea would be implemented. “I wanted a sustainable project that would have other accessories to ensure that people start perceiving public toilets as an investment,” he says.

In 2008 Kuria signed 25 contracts with different municipalities across the country to have the facilities installed. By 2010, the models had been installed in Nairobi, Malindi, Mwingi, Chavakali and Meru towns among others. Kuria, however, says that initially, the reception of the idea was very difficult at the government level. “This was because at the time, there were no clear rules of engagement. For example, there was no Public Private Partnerships Act so I was doing a PPP without a regulatory framework. But I am happy that this has been used as a model of the new law,” he says.

As we we mark the World Toilet Day today, Kenyans in urban areas can now access public toilet facilities for only Sh10, thanks to the ikotoilet model. Besides, the facility that has also opened job opportunities for many Kenyans through other economic activities. “Besides the ikotoilet, today you will find a shoe shiner, M-pesa shops and even other small businesses outside these facilities. There are even soft drinks being sold outside these toilets. That was unthinkable,” says Kuria.

Currently, there are over 60 ikotoilet units across the country, serving more than 10 million Kenyans a year. According to Kuria, ikotoilet employs about 80 members of staff across the country and earns the company at least Sh100, 000 per day. “However, we have franchised 20 of these ikotoilets to local entrepreneurs in the different parts of the country.” 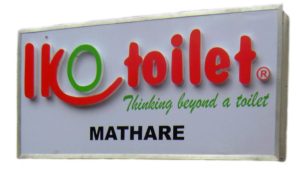 The concept of the Ikotoilet that cost Kuria Sh25 million to set up was birthed some years after 41-year-old felt obliged to develop a model to step up the government’s provision of water and sanitation services. “I weighed different options and felt that for us to enjoy a good urban life, we had to address issues of safe water, sanitation and waste management. I wanted to develop delivery mechanisms that can be adopted by individuals, corporate, private sector and the government,” says Kuria.

He adds: “That made me leave the government to join the NGO world because I thought it was more flexible. I congratulate NGOs because they tried different models even though not all of them succeeded. I wanted to see how do we learn from the government policy framework and how we can take to scale the models that have been piloted and succeeded.”

Two years ago, Kuria launched the Ikotoilet Plus, a vacuum toilet that does not use water hence does not smell. “Whereas others are using six to eight litres of water per flash, these ones do not use any water, apart from washing hands. That was the first to be used on land since it is normally available on aircrafts,” he says.

The venture cost him Sh15million to set up the four models that were used at the JKIA after the fire that burned down the arrival terminal last year. For the last one year, they have been hired for presidential functions within Nairobi.

Kuria holds a Masters in Architecture from KCA University and is currently pursuing his PhD in Public Private Partnerships at the Jomo Kenyatta University of Agriculture and Technology.

Africa Social Enterprise of the Year 2009 by World Economic Forum

Kenya Institute of Planners Award for improving our towns (November 2014)

Ashoka Fellowship on Public Innovation for 2007

Citation by President Bill Clinton during the Clinton Global Initiative 2009

5 months ago Impacthub Media
× Talk to us!