A Century of caring for animals

The heavy rains that have been experienced in most parts of the country since March have left destructions, loss of lives and also loss of property. Most of all following the water hazards during the floods we always lose animals too. Animals are part of our livelihood and make our homes more lively, productive and much more. What would life be without animals?

Following the after flood mitigation veterinary doctors therefore respond four to six weeks after the floods because this is when animals conditions deteriorate. Just like human beings animals are vulnerable to disaster , they feel pain, become ill as well as suffer from stress.

In Makueni county farmers turned in large numbers to take their livestock to get vaccinated against the diseases that are likely to appear after the rainy season. Diseases such as foot and mouth disease, ccpp , pneumonia among others are related to the cold season and hence prevention is better than cure. 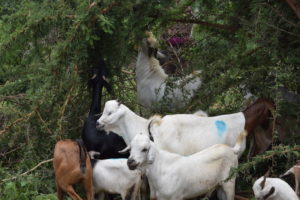 According to Hollings Mutysia, the area chief Kikumini location, Kambi Mawe sub-location, there have been reported cases of animals suffering from pneumonia, foot and mouth disease among others that come as a result of cold. He continues explaining that the reasons for excising vaccination are so that animals will not suffer from fatal diseases, also it will help farmers have heakthy animals and hence better prices when they sell them and also farmers will not spend much on treatement if their animals fall sick.

Here in Mulaani cattle crush I interact with various farmers who have come in large numbers to bring their livestock for vaccination.

Jacinta Kyalo is accompanied by her son and mother who are offering her a helping hand since they have a number of animals. She’s standing next to her donkey in which she tells me has been a great source of help to her.

Jacinta says that during the rainy season she started observing some wounds under the feet of her donkey. She was worried that it might be a serious disease that would result to death. Fortunate for her and other farmers who had animals with similar condition, now their animals are in good hands to get vaccination to prevent such diseases from occurring.
This was a project by the Vetinary Response Unit (VERU) in partnership with World Animal Protection (WAP) whose campaign objective was to mitigate animal diseases emergencies from happening and should it happen to reduce its impact. The campaign is targeting two hundred thousand animals and it is set to educate farmers on the importance of vaccination as well as improve the health of livestock.

Another successful project by the county government of Makueni is that of eradication of rabies. The governor of Makueni Hon. Kivutha Kibwana says there are minimal cases of people with rabies although he is looking forward to get a report from the ministry of health Makueni County to confirm reduction.