Elders drawn from 22  FGM hot spot counties have been urged to spearhead campaigns to denounce and end the practice of female genital mutilation in their communities by 2020.

This is after a high level forum held in Nairobi by the Anti-FGM board and UNFPA where the elders pledged to  partner with President Uhuru Kenyatta and the government to end the vice in Kenya. The elders noted that as community leaders and custodians o the culture, they will lead community dialogues and education sessions on FGM, issue statements and provide guidance in support of abandonment and lead public declarations renouncing the practice. 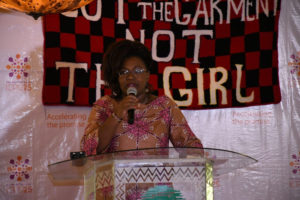 Speaking at the opening session of the forum, ministry of Public Service, Youth and Gender Chief Administrative Secretary Rachel Shebesh said FGM goes hand in hand with early, child and forced marriages. She decried the high FGM prevalence rates in Somali (94%), Samburu (86%), Kisii (84%) and Maasai communities at 78 percent. This is against the national average of 21 percent.

“This forum is a renewed commitment by both religious and cultural elders from the 22 FGM practising counties in Kenya to end FGM on one generation by 2022,” said Shebesh, urging the elders and religious leaders to make anti FGM messaging their personal responsibility as opinion leaders in their respective communities and spheres of influence. “Use your authority and power to fight FGM as our experiences manifest that FGM has no social, health, economic, spiritual or any other value other than impeding on the equal opportunity of women and girls to fully enjoy their inherent and GOd-given rights,” she added.

A second chance for women in Mathare Slums, Kenya

How a High school skills training opened my path in business

3 months ago Judy Ndunge
× Talk to us!