Tucked in a two-roomed space in Olympic Estate in Nairobi’s Kibera area is a group of five men engaged in different activities. Visibly, each of their tasks is a step in the process of designing uniquely made shoes for men, women and school going children. On a busy day, the room holds up to 15 workers.

On one side of one of the rooms is a display of the finished products, ready for sale. This is the working space for one Julius Okoth Otieno, founder and CEO of Reafric social enterprise, an organization that recycles industrial waste to make shoes for sale. Shaddy Odero the enterprise manager, fixes the beads meant for decorating the ladies open shoes while one of the tailors cuts the base of the shoes. The other tailor is engrossed in cutting a pattern of the next pair of the shoes. After drawing every two patterns, this tailor stiches the ready base of the shoe before handing it to a young man in the next room who sits by a small fireplace doing final touches to the shoes. “This is the final stage in making all the shoes. It ensures that the shoes are strong and perfectly finished,” says Otieno.

According to Otieno, all the shoes here are made from waste products including parts of car tires, offcut fabric or leather from tailors as well as sponge and pieces of light wood from carpenters. Although all these materials were free initially, the team now buys them at a fee from carpenters and tailors in different parts of Nairobi.

While growing up, Julius Okoth Otieno was irked by the unnecessary littering in his Kibera neighbourhood. As a child Otieno admits he felt helpless to do anything to address the situation. A lover of a clean environment and a then aspiring pilot watched every rainy season as industrial and commercial waste blocked the sewer system. “As we walked from school, we would see sewer lines blocked by either pieces of rubber, polythene waste or pieces of cloth,” he says. 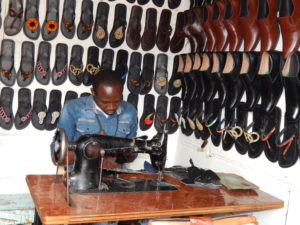 After quitting his job early 2018 as a software developer, Otieno set out to make unique fashionable shoes from what many industries discarded as waste. “Although I liked my previous job, I felt that my passion was in fashion; but most importantly, I wanted to avert the damage caused by waste while making jobs for other young people in Kibera,” he says.

“On average, we can make up to 10 pairs of shoes on a busy day. This, however, depends on the orders that we receive,” says Odero. Just early this week, the organization completed 100 pairs of shoes, ready for export to Paris, France. Depending on the client, Otieno says a pair of the ladies shoes can retail at Sh5,000. Locally, the sandals for ladies retail between Sh1,000 and Sh3,000 depending on the design while men’s shoes retail between Sh2,500 and Sh3,500.

The 24-year-old hopes to employ at least 200 young people in Kibera through the Reafric social enterprise in the next ten years. The enterprise today employs nine full time staff and six part-time others. From its profits, Reafric has sponsored 13 girls for basis computer training and linked nine of them to jobs between 2017 and March 2019.

How we turn GBV survivors to great souls