Patrick Oduor joins a queue of other Kibera residents to wash his hands in Kamkunji grounds in Kibera. The line ends up in a locally assembled hand washing facility that was set up early Wednesday in a bid to address hygiene and sanitation needs in the informal settlement.

The facility comprising a 200-litre drum of water is fitted with a tap and a wooden stand. On the sides are two half-litre bottles of liquid soap. “Since morning when this facility was set up here, I have used it at least five times. I often come back here to wash my hands after interaction with people around here,” says Oduor.

According to the father of three, the hand washing station is an answered prayer to him and many other dwellers in informal settlements who cannot afford soap or running water. In his house, he says, there is no running water and as a result he cannot achieve the required hygiene standards. “Whenever I have to wash my hands, my wife has to help me with water from a jug or a basin. We rarely use soap in our house,” he said.

Oduor represents many urban informal settlements dwellers who cannot access running water. According to the World Health Organization, every year, about 827 000 people in low- and middle-income countries die due to inadequate water, sanitation, and hygiene representing 60 percent of total diarrhoeal deaths. About 432,000 of these deaths are linked to poor sanitation.

And with the current threat of corona virus, people living informal settlements are left with limited options regarding their hygiene. The high populations and consequent congestion in the slums pose a risk to the health of the millions of urban dwellers. In order to avert any new infections, Shining Hope for Communities (Shofco), a local non governmental organization in informal settlements has installed 15 community hand washing stations in Kibera and five others in Mathare informal settlements.

While WHO believes that improved sanitation could prevent the deaths of 297 000 children aged under 5 years each year, proper hygiene through hand washing is now a necessary practice that can help tackle the challenge of Covid_19 virus that has so far seen seven people in Kenya test positive.

Johnstone Mutua, water and sanitation officer at Shofco says many informal settlements lack the basic hand washing facilities, a situation he believes can be a catalyst for the spread of corona virus if not addressed on time. “Kibera and other informal settlements lack basic hygiene facilities such as proper toilets and hand washing facilities. Quality of water here is also wanting,” said Mutua. In view of this, and with the announcement of the first corona virus positive case in the country on Sunday, Mutua says the organization felt compelled to step in by setting up free handwashing stations in the area. 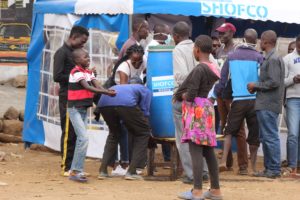 Beside hand washing at the new stations, Shofco staff here teach locals basic hygiene practices such as how to wash hands and the need to keep the recommended social distance to avoid the spread of the virus. According to Mutua, the organization has installed the hand washing stations in Kamkunji, 42 area, Darajani, DC area and Bypass area among others.