With over 20 years as a nurse working in the hardship areas of northern Kenya, Francis Lenkupae 47, shares his experience serving in different parts of Samburu County. Despite the rough terrain and limited resources, he says passion has kept him going.

One afternoon in 2016, Francis Lenkupae was going about his ordinary work as a nurse at the Ol Donyo Nasipa dispensary in Samburu North. He had worked at the facility for four years. “It was a really hot afternoon and some boys arrived in a motorbike with a badly injured boy who had been badly fractured by a warthog while herding in the fields,” he remembers.

The injured boy was bleeding profusely and I quickly knew I had to quickly act to save his life. With no mobile network or an ambulance nearby, Lenkupae who was the only health worker in the facility dressed the boy and with a borrowed lesso strapped him into his back. His destination was Wamba Catholic Mission Hospital that was the nearest. “Using a motorbike, and leaving the boy’s mother behind, I rode86 kilometres to the health facility. It was the lowest moment in my career as a health worker,” he says. Fortunately, the boy got treatment and recovered in about two weeks. 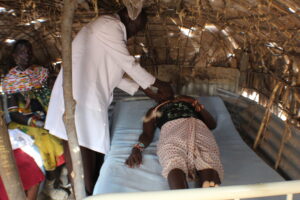 This is just one of the many emergency cases that Lenkupae and other health workers working in hardship area have to face every day as they deliver healthcare to the remote parts of Kenya. Lack of proper road network, limited phone network, absence of ambulances, threat of wild animals and the frequent challenge of bandit attacks are just some of the challenges that health workers in such places have to deal with. But passion, Lenkupae says, keeps him going.

As the world marked the International Nurses Day last Tuesday, nurses serving in such areas as Ol Donyo Nasipa and other marginalized areas, perhaps had no access to internet to follow the global celebrations. Their work stations do not allow them such luxury. And as Lenkupae says, saving lives is their sole duty every day they report to work.

On the day we arrive at his current facility – Lerata Dispensary- in Samburu East, Lenkupae receives us at the gate. He has worked here since 2018. On one hand he holds a bunch of keys and on the other, he carries packed lunch. He had taken a lunch break to the nearby shopping centre but had to rush back to the health facility to attend to pupils who have visited with different ailments. They perhaps have a long journey to walk after they seek medication. As a result, Lenkupae has to quickly attend to them lest they get late for their journey home. He is the nurse in charge and the only health worker in this health facility.

His dedication is, however, visible in the passion with which he serves the pupils. “I have to attend to them first. I am not sure how far they are going,” he says as he greets us and proceeds to attend to the young ones. This is the daily routine of 47-year-old nurse in charge at this facility. Many times, he has had to make a tough choice between his leave days and service to patients in the area. Some come from as far as 30 kilometres away.

After about 40 minutes, Lenkupae releases the pupils after attending to them. But that’s not all. Three women walk in together for their post-natal hospital visits. He attends to them at a maternal shelter right behind his office.  This is the typical day in Lenkupae’s work. “It is unpredictable. You can expect anything; from an emergency, complex pregnancy, a normal one, children seeking treatment for fractures and so on,” he says.

Lenkupae’s 22-year-career in healthcare started in Barsaloi in 1998 where he worked there for seven years before being transferred to Suari model health centre in 2004. Under his leadership, the facility was promoted to a health centre. He would then be transferred to Ol Donyo Nasipa health facility in Samburu North where he worked for four years before joining Lerata dispensary where he now works as the nurse in charge.

As a pupil at South Horr Primary School, Lenkupae and his best friends wanted to purse the same career. They wanted to become teachers. But Lenkupae’s education sponsor, a German national convinced him to pursue health. This is how he separated with his best friend who is now a head teacher. With the help of his sponsor, Lenkupae enrolled for a nursing course at Wamba nursing school in 1995 and graduated in 1997. He was immediately hired to work in a dispensary in Barsaloi in 1998.