Growing up in a family of eight, Joy Watitwa’s daily schedule was different from that of her siblings. Their play time depended largely on her condition. As a sickle cell disease warrior, Joy’s health was unstable most of the time. But for her sake, the siblings often opted for indoor games in order to accommodate her.

Joy has been in and out of hospital. Her medication is not as affordable either. As a result of the sickle cell disease, she developed deep vein thrombosis, a medical condition characterized by blood clot. “For this condition alone, I spend at least Sh10,700 per month on medication since 2017. This is besides the other regular sickle cell disease drugs that I take daily,” she says.

Joy’s situation paints a picture of more than 6,000 people born with sickle cell disease every year in Kenya. Costly drugs, stigma and inability to engage in some chores are some of the challenges faced by people living with the disease. According to a study done by Lancet Global Health, 50 to 90 percent of children born with sickle cell disease dies before the age of five. “As a sickler, your day is almost unpredictable. Pains on the joints, back and chest. When serving people at the workplace, it is easy for them to mistake your condition for a bad mood,” says Joy who works at Bungoma County Referral Hospital Records department.

As a student, life for a sickle cell disease warrior is not any better. Stigma and discrimination during group activities are common. To Joy, being branded a weakling in school was common. “As a student in primary school, I felt openly discriminated against. Many pupils did not want to even play with me. I always looked forward to going home after classes. It was only at home where I felt accepted,” she adds. 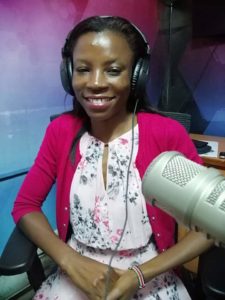 For many people living with sickle cell disease, there is more than just treatment costs. The disease requires a dedicated care giver and emotional support from the immediate family and work places. In order to ease such burdens on affected families, Bungoma County is in the process of setting up a specialist clinic for sickle cell disease and Haemophilia at the Bungoma County Referral Hospital. The renovation of this clinic is being supported by the Kenya Haemophilia Association. The county First Lady Caroline Wangamati is optimistic that the clinic will come with a full range of diagnostics including an haemoglobin electrophoresis machine for confirming this disease.

Her office is also engaging decision makers at county level to ensure adequate supplies of the basic medication especially hhydroxyurea. “The clinical team have been receiving refresher education on the disease through efforts spearheaded by Prof. Constance Tenge and the International Cancer Institute. We are therefore looking forward to a day in the near future when our patients will get their full care at our Referral hospital,” said Mrs. Wangamati.

According to Dr. Kibet Shikuku, the national Chairman for Kenya Hemophilia Association sickle cell disease warriors’ haemoglobin (HB) count can be at six or less, which is below the normal HB level of 12. The disease, he says, can cost patients between Sh300,000 and Sh400,000 to treat.

Yellowness of eyes, weak body and compromised immunity are some of the characteristics of sicklers, something that makes them more prone to other infections. “These patients frequent the hospital due to such infections. They can even end up with stroke. They have blood pressure because of their lungs. This therefore calls for extra measures to contain the disease,” he says. Such measures include taking fluids often in order to ensure an easier flow of their blood, have balanced meal and have the right doses of antibiotics and other drugs.

According to him, the country now has over 60,000 sicklers across all ages. “But sadly, no one seems to speak for this team. As a result, Kenya Hemophilia Association in partnership with the Sickle Cell Foundation is initiating awareness and advocacy programs.”

The burden of sickle cell disease on caregivers

Having nursed a number of patients at his work, Manyonyi says it was easy for him to accept his son’s condition that was diagnosed at the age of six months.  The journey with the disease, however, hasn’t been easy. “You must have the necessary drugs all the time as well as enough fluids. In many occasions, we had to be awake, constantly checking on him. As parents, we also did a lot of talks with our other children to accept his condition and consider his condition when planning any social activities,” says Manyonyi.

According to him, the cost of sickle cell disease goes beyond the drugs. It needs a lot of sacrifice, special meals and constant protection of the patient against any form of injury that may cause bleeding. The disease, Manyonyi says, could come any time; day or night. That meant having stand-by means of transport and emergency money for treatment of transport to the hospital.

He advises parents of children with sickle cell disease to accept their children’s condition and be willing to make the sacrifice on behalf of their children. “If taken positively, the disease can be effectively managed. There is also need for the patients to cooperate with healthcare workers and follow all the instructions given to them,” he says.