By Collins Omondi and Benson James

It is 10am and Roseline Mweni* is busy tilling a portion of land near a residential area at 42-Kianda in Kibera.  This portion of land was not always a farm.  About a year  ago, it was full of houses until they were brought down after the government began demolishing residential buildings next to the railways and roads.  After the demolition exercise, the land was left bare and had become a source of insecurity in the area because it had been turned into a criminals’ den.

“You could not pass here, even during the day. It was a spot for idle youth who could terrorise residents and that is why we decided to turn into into a garden to feed our families,” she said. 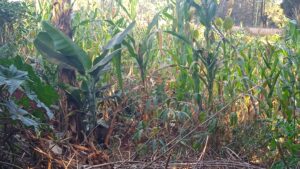 As we approach, Mweni is so engrossed in her work, pruning her budding crops. She started the farm project in May, when Covid-19 pandemic was spreading across the country like wildfire. Mweni was not the only one who turned the idle piece of land into a kitchen garden–many locals saw an opportunity to turn the area into a treasure. A clear illustration of this is the presence of a variety of crops in the land. Mweni said the local police post has had a significant contribution in turning around the criminals’ den into a food basket by giving them permission to clear and till the land.

“One of the reasons I was motivated to start a kitchen garden here is to fend for my family when the country was under a lockdown,” she said.

Mweni said at least 50 people have small farms on the land and are using it as their main source of food.
[Image 7.jpg] A portion of the land showing a variety of crops.

The process of transforming the land into a farm was not easy. Given that the area is far from a source of water, locals had to dig a borehole next to the farm.  The land preparation process was not simple as they had to dig up the cemented floors.  In the end, the project has resolved two problems for the residents– it has reduced the rate of crime in the area and has gone a long way in fighting hunger which is goal two of the Sustainable Development Goals on zero Hunger.

In April, the World Food Programme (WFP) warned that the Covid-19 pandemic would push an additional 130 million people across the globe into the abyss of starvation by the end of this year.

To mitigate the effects of the pandemic on food security, the government started a project dubbed the National Agriculture and Rural Inclusive Growth Project (NARIGP). The project, supported by the Small Scale Irrigation Value Addition Project (SIVAP) and the Kenya Climate Smart Agriculture Project (KCSAP) is aimed at ensuring that underprivileged households get food by helping them set up kitchen gardens on their compounds or balconies. In Kibera, where space is limited, the initiative by Mweni and other farmers is helping fulfil the goals of this programme by putting food on the table of many families.

How an electrical engineer found a fortune in poultry keeping

A new digital platform for data-driven malaria responses in Africa

Kenya outperforms the global average of female board of directors

Women rights organizations call for policies to protect the girlchild

2 months ago Rose Muthoni
× Talk to us!