For a long while, the hilly Mbooni area of Makueni county in Kenya has for a long while been plagued with land use changes, rapid population growth, poverty, climate change variability and lack of diversification when it comes to livelihood which has resulted in inappropriate land use methods and water scarcity. Logging is happening rapidly and soil erosion as well as siltation in the region has resulted in land denudation and farm lands losing their fertility. Food security is, thus, compromised.

However, farmers in the region, particularly women are changing their mode of farming and starting out kitchen gardens and changing their mode of farming, in order to save the environment, feed their families as well as earning a living. For instance, Jacinta Ndunga, whose kitchen garden began in 2019, has not only earned money to take her son to a national school through the earnings from her garden but also has food on the table. In her three ha farm is French beans, kales, spinach as well as tomatoes which she substituted after years of planting only maize and beans for cash. In another space she has a nursery where she has planted kales, growing slowly, ready to be transplanted into the big farm.  Her mind shifted to this mode of farming thanks to the lessons she received from PA Tree Initiative movement.

“I planted beans and would harvest five bags which would fetch her 15 to 20 Kenyan shillings per bag. That was a huge loss considering the fact that I had spent cash for labour, fertilizers and still it wasn’t enough to take care of my family and their needs. However with kales, they are ready after three weeks and I already have cash at hand and another remaining for capital to grow another bunch,” she narrates.

From what she was taught during the training, Jacinta also employs organic manure as opposed to the chemical fertilizers which have a negative effect to the environment. The cultivation of beans and maize only for money also affects the soil fertility leading to land degradation.

By definition land degradation is the loss of the productive capacity of soils and is characterized by biodiversity, loss of soil fertility, as well as overall deterioration of natural resources and takes place through water, soil and biota. Another principle sign of land degradation is the loss of soil organic carbon, which makes the process one of the greatest contributors of climate change by increasing emissions and minimizing carbon sinks.

Many Kenyans in the rural areas depend on agriculture to earn a living. It accounts for 33 per cent of the country’s GDP but only 20 per cent of Kenyan land is suitable for farming due to land degradation. Much of it also is not used to its full capacity as most farmers rely on rain for irrigation.  Research carried out in 2019 by the Kenya Institute for Public Policy Research Analysis indicates that every year, there are 14.5 million Kenyans facing food insecurity and poor nutrition. In the same year, the Global Hunger Index ranked Kenya 86th out of 117 countries which classifies the country’s situation as extremely serious.

By definition, food security is when the populace lacks enough resources or money to provide food to eat. The World Food Programme indicates that the people most vulnerable to this condition are those who live in the dry regions which cover approximately 80 per cent of the country. Sadly, the families who face such crisis live in rural regions; they are poor and rely on farming for income. One of the factors contributing to this food security is land degradation. If it continues at the pace that it is, it is projected that by 2050 more than half of the cultivated agricultural area in Africa could be unusable. The continent might also be able to just feed 25 per cent of its population by the same year.

It is such factors that drove Patricia Kombo, an environmental enthusiast to begin the PA Tree Initiative in her village in Mbooni. “I noticed that my people were growing same crop over time which replenishes nutrients and its harmful to the soil. Secondly they have been using fertilizers and pesticides some of which are not applied in the correct measure which is very risks. The cutting of trees to expand farms and also for firewood makes soil loose causing a lot of  soil erosion,” she narrates.

Patricia adds that the bare topography means that when it rains all the soil goes to the river which leads to soil erosion. By then, she was only a third year student at Daystar University when she noticed how people were not using land sustainably. She did twice a year during the rain seasons as  it was easy to demonstrate even how to plant and also how to establish the nursery. Some, like her mother, had the mindset that only maize and beans can be grown. That is how she began to train them on kitchen gardens so that they can produce food locally to feed their families.

“I worked with women because they are the one tasked with providing food.  The projects are like creating environmental clubs, growing trees and training them on sustainable land use practices like kitchen garden,” she says.

One of the challenges that she faced was people especially the older ones, not believing in her project.

“They kept on asking how can young girl tell us about farming? What does she know about this when she doesn’t farm herself. I had to start my own kitchen garden for them to believe that it would work,” she recalls.

Another woman who was converted was her mother, Gladys Kombo, who at first didn’t believe in her daughter’s teachings and had planted only maize and beans in her farm just like all the other farmers in the village.

“I used to look down on my daughter and would ask her whether we will make it with what she was teaching us. I would think that it is a joke. We began with planting potatoes and when it worked, I was strengthened to continue. We now support her with her nurseries and the seedlings that she collects,” Gladys says as she uproots some kales that she has planted in her farm.

They began in small portions and began with tomatoes and then with kales. They now have enough to sell and some to eat. Gladys adds that the success of their farm has converted other villagers to also adopt this mode of farming.

“When they see the fruits of our labor, they want to do this. In August, we usually have a shortage of food and kales but now so many people have adopted this and have a lot of food to take care of their families and also sell some. My daughter also goes in schools and this has also changed the mindsets since the children talk to their parents on what they have been taught and some parents have changed their mind as a result of this program,” she narrates.

Gladys believes that if the whole village adopts this farming method, they will not only be able to sustain themselves and feed their children but they will also be able to eradicate poverty. During the Covid 19 pandemic, most villagers who has shifted their mindset had food enough to feed their children and sustain themselves. The youths too who picked up the passion for environment and planting trees also benefited during the season. For instance,  19 year old Ruth Musenya who attended Patricia’s classes got to learn about seedling project. 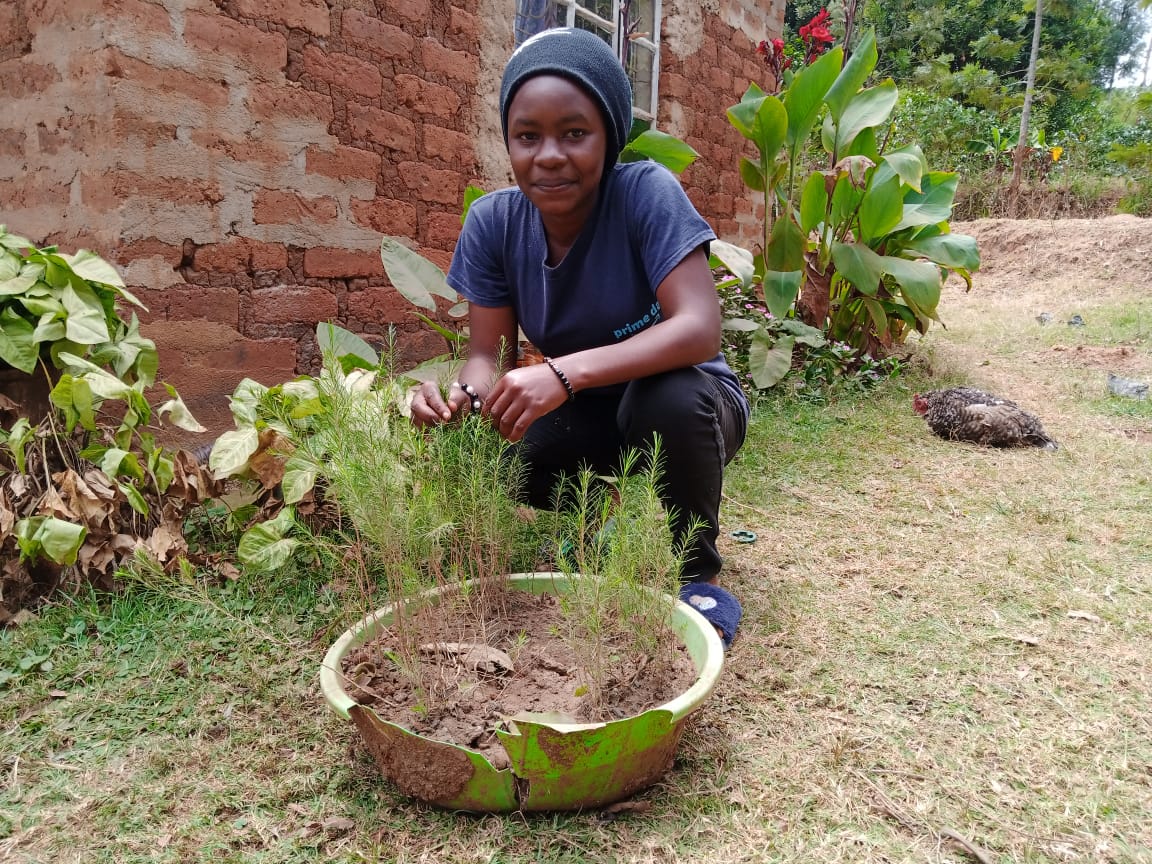 “She introduced us to the tree planting and showed us how we can use broken pots and basins as a nursery for the trees. I was able to start mine and sell some which sustained me and my family during the pandemic.  It also made me not be idle but engage in something productive,” she narrates.

She sells a seedling at ten shillings. Some of the trees that Ruth has planted are the whistling pine which have tap roots that hold the soil and reduces erosion. It also fixes nitrogen in the soil and restores the ecosystem.

Patricia is happy that so far eight women and 30 youths have changed their ways and are reaping the benefits of her teachings. Many more are coming and during rainy season,  they usually set kitchen gardens. During harvesting, which is in August, they harvest seeds and establish tree nurseries.

“People have transformed in their production patterns .They now know they can feed their families by cultivating in a small piece of land. Communities are now aware of  using locally available materials like keeping avocado seeds after eating their fruits. Working with schools has transformed the pupils mindset and now they have strong environmental clubs,” Patricia says.

Finances is one of her and the farmer’s major challenge. Patricia funds her project through her friends who donate to the project to offset their carbon credits thus we plant trees on their behalf. Her family too has been very supportive and financed her project.

“I also save some money from  my pockets. I have another challenge where both the young and old come to me as they want to sell seeds to me or seedlings which sometimes I have to buy from the even if I have mine because they say I trained them. I can’t chase them away since I desire them to see the benefit in future where they can be selling seedlings to other people. I want to motivate them to continue growing and planting trees,” Patricia explains. 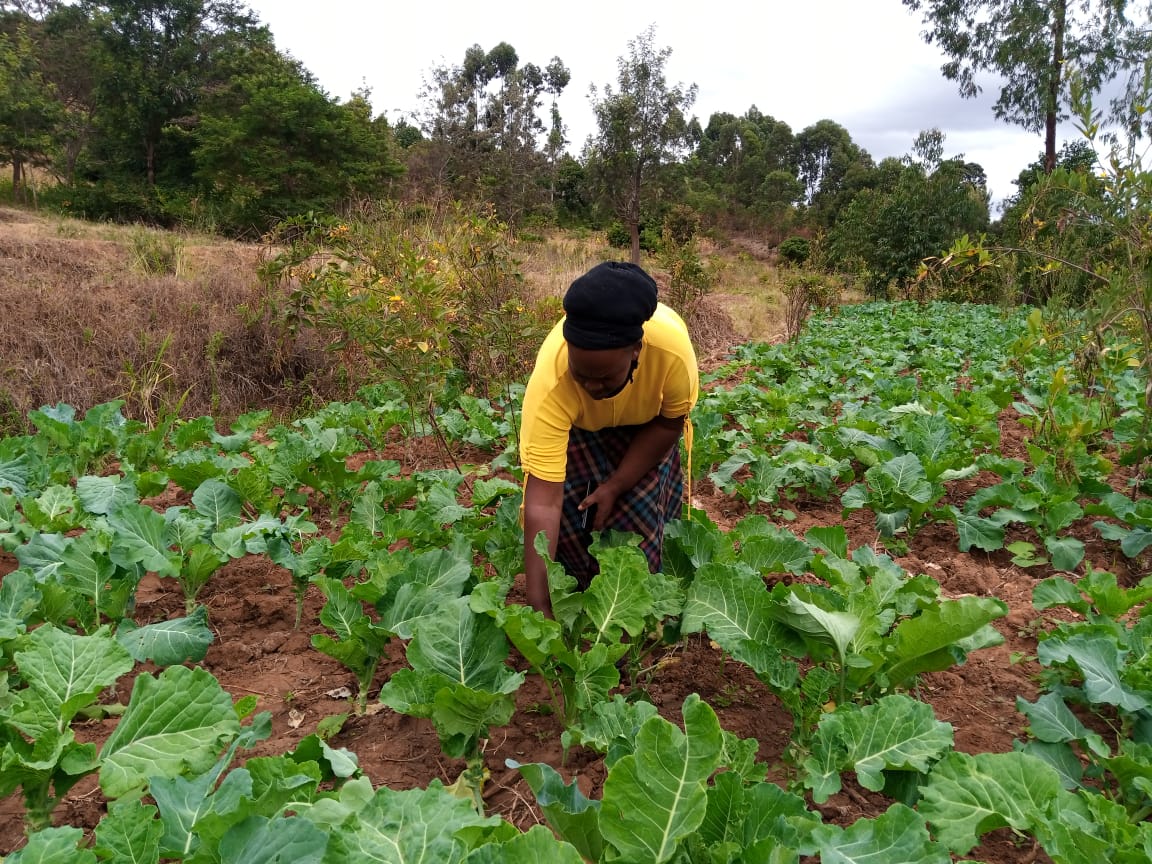 Before she buys the trees, Patricia always checks whether they have planted some in their farms. She donates the seedlings to schools and some she plants in their farm.

For the farmers, the challenge of finances comes in when it comes to labor and also buying diesel for the water pump which supplies water from the river to the farm. The weather patterns also keep changing which further affects their activities.

“Initially people had weather dates when the rains would fall. But nowadays nobody knows, it either comes early or late. It has disrupted farming because it comes shortly and its stops. Other times it rains for longer periods like during the last harvest, it rained when the beans were almost ready and it led to them rotting in the farm,” she recalls.

In future, Patricia hopes that her village will be well informed about conservation, climate change, mitigation and how to use land sustainably. “I envision every family will be growing their food sustainably and practicing Agroforestry. It’s my goal to see climate literacy included in the school curriculum so as to ensure we raise a generation that has adequate knowledge on climate, sustainability and environment,” she says in conclusion.

1 month ago Viola Kosome
× Talk to us!