Harrison Wanguku has a knack for the art and has decided to use his God-given talent to help young people keep busy and stay away from  destructive behaviour.

He has been taking young boys who are out of school and trains them in his workshop. So far, he has trained more than 15 teen and young adult males who come in handy when he has many orders to deliver.

“I talk to them and convince them to join me in my workshop from within the Gachie environment, rescuing them from gangs and drugs that are rampant in this area,” he says.

Among the skills he imparts them with are constructive drawing. He then gives them a percentage of the sales and encourages them to reinvest in buying more materials. One of the beneficiaries is his 17-year-old son, John Karuga.

“I buy most of the artwork materials from Eastleigh Town, and all the work is done manually,” he continues, saying that he can make four art work pieces of animal design in a day. The trainees learn to cut, shape and design under his keen eye, while he puts the finishing touches on the artwork.

Several of the successful trainee have gone on to open their own workshops, with one of the young men running his own workshop in Ruiru Town, a thirty minutes’ drive outside the city.

“I really wish to take in more young men and train them, but the workshop space is very tiny. I even had to close down last year due to challenges paying the rent. However, I look forward to renting a bigger space in future, where I can take in more trainees,” he says.

The Kenyan government, keen to see every child does not miss classes, has waived tuition fees for learners, highly subsidizing expenses leaving a minimal payment for parents to settle. For 17-year-old John Karuga, the total tuition fees was $100 (Shs10,000) for the whole year. He however had a tuition balance of $65 (Ksh6500/-) hence he could not resume learning when schools reopened in January.

Covid19 hit his father’s business, destroying his only source of livelihood. His family was hounded out of the small rental house that they were living in after rent arrears piled for months. It took the kindness of neighbor to host the large family.

The 2020 school year was coming to a close in only a week or so, and the next school year, 2021, would begin only 10 days later. It was troubling that this boy could still miss school. 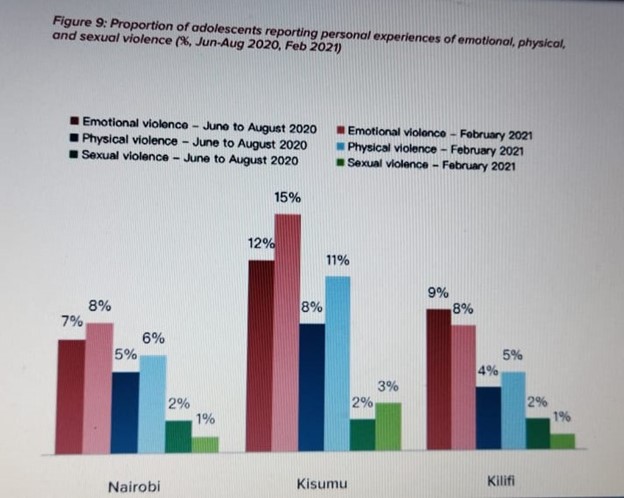 According to a 2020 report by International Labour Organisation, three-quarters (73%) of the young people who were either studying or combining study and work before the onset of the crisis were able to transition into online and distance learning, with one in eight young people (13%) without any access to teaching or training; a situation particularly acute among youth in lower-income countries.

Karuga never had any classroom interaction since March 2020 when schools were shut countrywide. The first born in a family of five children has been helping his parents fend for the family, resorted to doing menial jobs which included learning the skill of artwork and hawking. He is able to make one piece of the art in two days. When Karuga’s father took him back to school on the opening day of the new school year, he was fighting back tears.

When schools reopened in January 2021, 16 per cent of girls and 8 per cent of boys did not return to school according to a report released by Population Council Kenya in July 2021 titled “Promises to Keep: Impact of Covid19 on adolescents In Kenya”.

The report further indicates that school closure in 2020 was a major interruption to adolescents, with a number reporting they were worried about school fees, repeating classes, getting infected with COVID-19 at school and completing school.

Sizeable proportions of boys (52%) and girls (39%) reported experiencing physical violence during the pandemic, and about half of all adolescents said they had experienced symptoms of depression and 75% reported skipping meals when their families could not afford food. This translates to approximately 250,000 girls and 125,000 boys not re-enrolling in school.

Education expert consultant Benson Wesonga observes that the boy-child is highly disadvantaged when it comes to opportunities and the need for protection from life’s hardships.

“At times, parents and caregivers assume that a boy should survive on his own so he is quickly pushed to the harsh world when things are tough,” he added that due to the lack of programs that look out for boys’ needs, they are prone to more neglect when things are tough.

This reflects negatively on their quality of learning due to absenteeism as they will be lagging in schoolwork compared to those who resumed classes. This would mean spending extra money for tuition, which could be hard due to the fact that they missed school due to financial constraints.

“Many of these disadvantages are common in arid areas, the informal and low-income settlements and areas with high populations where resources are strained,” Wesonga adds. The boy child is more likely to be given menial jobs, corroborating the Population Council report that due to job opportunities, a number of boys opted not to resume studies when schools reopened in January 2021.

Based on the projections from the 2019 census, the study estimated that 270,350 girls and 137,113 boys who were in school in March 2020 had not returned by February 2021. Lack of school fees was cited as the major reason among 47% of girls and 21% of boys. The other key reasons among girls were pregnancy (10%) and early marriages (5%), while a few in Wajir (3%) did not see the point of returning to school. Amongst adolescent boys, access to job opportunities was a key reason for opting out of school.

The effect is that boys are likely to slow down the nation’s journey towards achieving the Vision 2030’s Sustainable Development Goal number 4, which is to ensure inclusive and equitable quality education and promote lifelong learning opportunities for all.

“In addressing gender equity, we should not exclude boys, because gender inclusivity addresses both boys and girls,” Wesonga opines.