In 2019, something that pulled at the heartstrings of the people who witnessed it happened at Nairobi’s oldest library, the McMillan Memorial Library on Banda Street. A film called Operation Legacy had just been screened there, after which an old man in the audience stood up to talk about what he had just watched. The film documents the story of a group of Mau Mau veterans who had sued the British government to reveal the atrocities they had committed against them in Kenya between 1952 and 1960.

“He stood up and said that it was the first time he had seen an interest in this story. He couldn’t believe that people had showed up to watch it. What broke my heart was that he was saying that as he was watching the film he was looking at the pictures of the detention camps in Kenya keenly,” says Wanjiru Koinange, co-founder of Book Bunk, which screened the film. “He was looking around for pictures of his mother because the last time she had ever been seen was when she was taken away to a detention camp and he was thinking maybe he would see a photograph of her.”

Just two years earlier in 2017, Wanjiru and co-founder, Angela Wachuka had quit their jobs and registered Book Bunk to focus on the work of restoring Nairobi’s most iconic libraries, and here was a man touching on the kind of impact they wished to have. “I will never forget that day because it really showed the importance of preserving our stories. He thought that all this time nobody cared about it, yet here was a room of people who were eager to hear what had happened and wanted to know how they could help,” says Wanjiru.

The two women have known each other for about 12 years. Both are lovers of words and worked in arts and culture. “When we met, I was the director of Kwani. We were organising the Kwani Literary Festival (Kwani Litfest) and Wanjiru had joined us as the festival producer,” says Wachuka.

Wanjiru loved the work and was living in Cape Town at the time but she would fly in to work with Wachuka on the festival. While launching Binyavanga Wainaina’s memoir at the festival and were looking for a public place to hold it, they happened upon the McMillan Memorial library. Built in 1931, it is the second oldest library in Nairobi, with branches in Kaloleni and Makadara . Run down They hadn’t anticipated how run down they were. “We were like, ‘If public libraries look this way, what does this mean for our storytelling?’ That’s kind of where the shared vision for Book Bunk began,” says Wanjiru.

She got the opportunity to write for the Commonwealth Writers about the library in 2015 and understand its history, why it looked the way it did and why it was so neglected. “Honestly my obsession with the building got kind of crystalised by that piece,” she says. Wachuka says while working together, one of the things that they really wanted to explore was the fact that that they really liked the idea of public spaces, them being “accessible, funky and fresh, and reflecting how Nairobi is.” 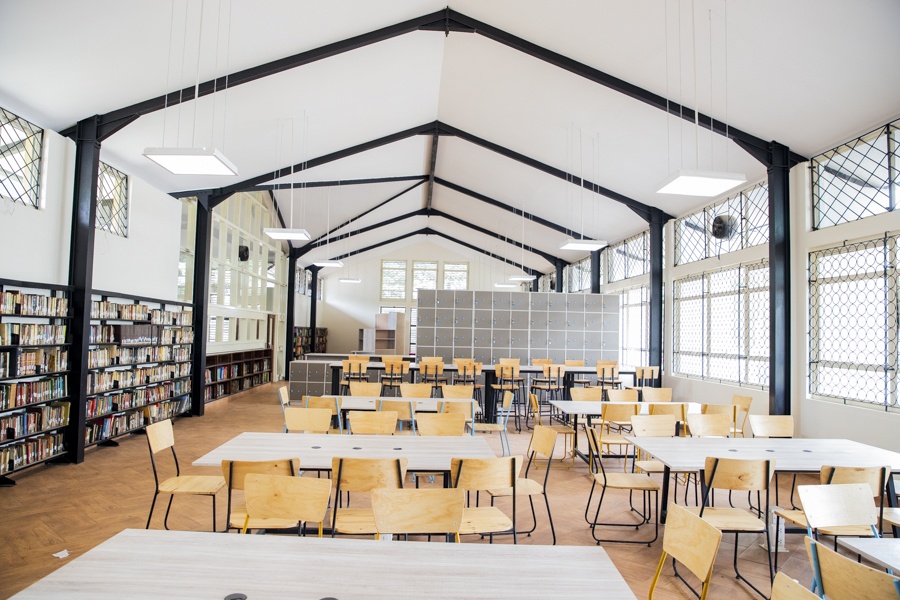 When I walk into the Eastlands Library in Makadara, it is evident that they have achieved that. The place is quintessentially Nairobian. Areas inside the library have been name after the lingo and places in Eastlands, such as Camp Toyoyo, Baze, Sarakasi and Concodi. “One of the things they hear a lot is that this library and the one in Kaloleni are “too nice for Eastlands’, And I’m like, ‘What does that even mean? What is too nice for Eastlands?’” exclaims Wanjiru. “Nice things don’t just belong in Westie (Westlands). We all deserve nice things. We have shown people that they can have these things, they can prepare for them, they can share them and they can belong to them.”

Book Bunk is turning public libraries into what they call ‘Palaces for The People’. In addition to physical renovation, the libraries are introducing technology into every aspect of the libraries, have introduced will also hold (and have already begun holding) events and programmes that celebrate art, wellbeing and learning and the communities around the libraries will be the primary beneficiaries of the projects.

This library, in particular, had no lights or water, but now there are square-shaped modern lighting fixtures suspended from the high ceilings. I place my bag in one of the new lockers and off with my key. Along one wall are boxes with donations of about 4,600 new books that are still in the process of getting catalogued. The books are based on a wish-list made after the community talked about the kinds of books they would like to see in the libraries.

As we look around, Jonathan Bii, Book Bunk’s communications manager explains that the creatively placed seating spaces at the end of the hall did not exist prior, and in their place were walls made of asbestos. “Asbestos was popular back in the 70s but it is very carcinogenic, so we had to take those walls down. We converted them into spaces with sockets where you can sit while charging your device,” he says. Everything, down to the tiniest detail has been done thoughtfully.

Outside is a recreational garden whose growing grass was chosen specifically because it is soft and one can lie on without discomfort, a courtyard with a checkerboard lawn, a newly installed walkway with roofing and cinderblocks on the other end for more seating space. At the edge are underground water tanks whose tops can be seen from the ground. There are newly installed toilets, a terrace with more seating space and whose entire grey floor is a map of Nairobi with the location of every library in Nairobi marked on it. 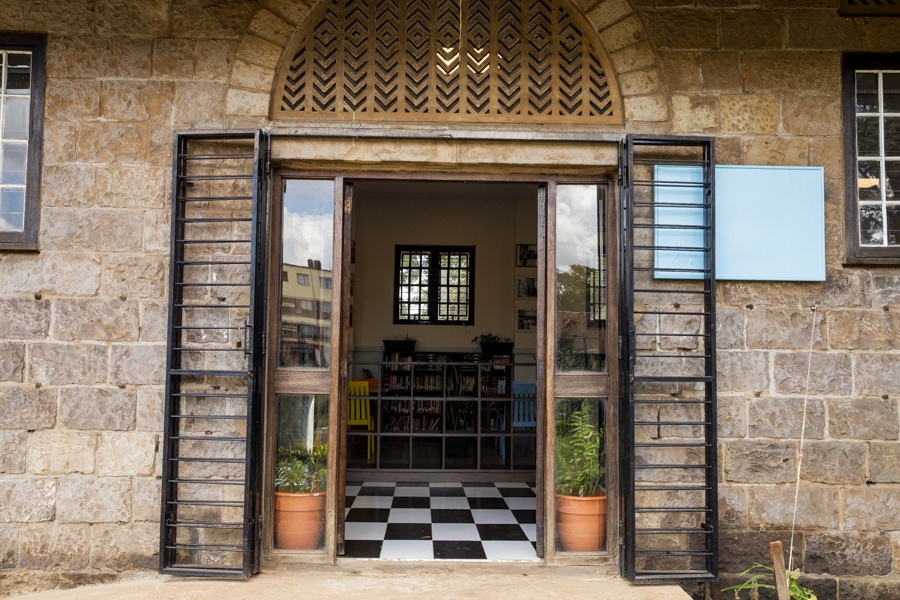 Back inside, is a beautiful kitchen. We pass by a team of people working at the project next to a green room full of material waiting to be digitised. Some of the material are glass-plate negatives of decades’ old photos from as far as the late 1800s and early 1900s awaiting restoration, which may have been lost forever if no one had taken the initiative to do this.

Bii confirms that a few of them sadly do end up being unsalvageable. The whole library is certainly a sight for sore eyes now, far from the dilapidated state it was in a few years ago. This scene is replicated at the Kaloleni library but from a different creative angle as that one is more popular with children and was renovated as such, and they are in the process of taking on the main McMillan Memorial Library in town.

All this is an incredibly expensive undertaking. How do they get funding for it? “We look for money everywhere! We started with actually just putting together a very detailed concept based on the data we gathered, put together a case for it and started distributing it to people,” says Wachuka. They raise money through different ways such as individual donations, (in terms of money, in kind contributions and also volunteering), corporates and foundations.

Wachuka says that one of the challenges they are facing is that it is a tough time to sell this kind of feel-good idea to people. “Everyone is protective of their budget and their spending but we like to make the case that actually it makes public spaces even more important because it does show, especially in a time when everyone is cooped up in their homes and have been for a long time, that actually public spaces and public libraries are more important than they have ever been before,” she says.

Another major challenge they face is that a lot of the resources and books in the libraries are very colonial. “At the beginning of our work what was most interesting about the archives was what was in the collection, because we didn’t know what was in there,” says Wanjiru. 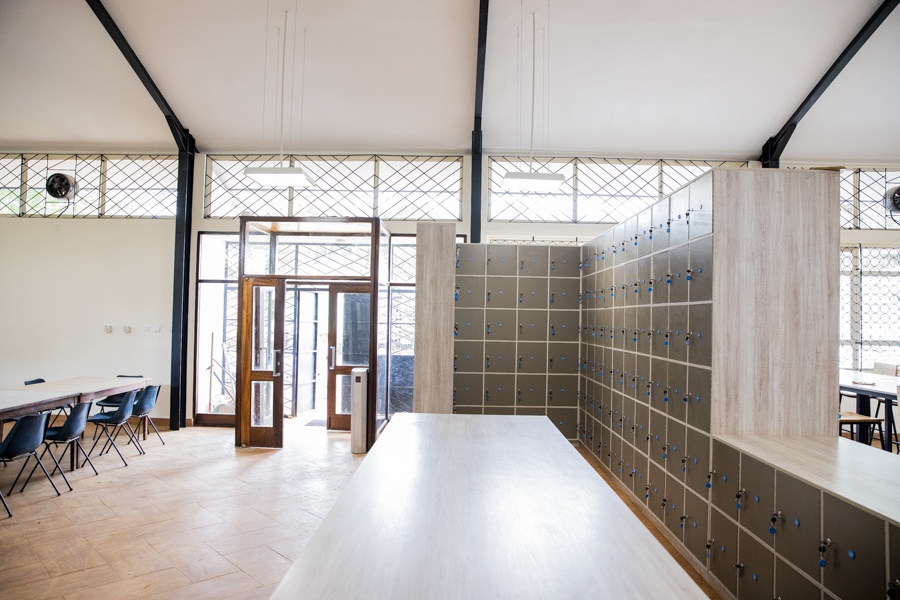 “It was really interesting to learn about what kind of history we had at first, but today what I am more interested in is what is not there. We have realised as we go through the collection we have that the gaze is very white male. It’s very colonial. People writing about us. Colonials writing about native Africans, which was not always done in the most tasteful light. “So it has been very problematic doing all this and then finding that your story is not there. No one is asking about our experience from our perspective. So we are trying to figure out how to correct that because we always have as Africans the challenge of being oral in our history. Having our own history is really missing from our collection in the library and that is something we are going to correct very soon.”

When they are done with McMillan and the two libraries, they will take on others. What will success look like after all this? I ask Wachuka. “Thriving public libraries and other public spaces across Nairobi that are maintained well and that continue to serve different generations of people for all their needs. Somewhere they can go and relax, somewhere they can go and learn, somewhere they can also access new things about life, about the world and for that to be equitable across the city of Nairobi,” she says.

It also looks like the man who spoke during the screening of Operation Legacy at McMillan Library and others who had the same fears can rest a little bit easier – our stories will not be lost, after all.

The story was first published on the Standard.