It is a cold Thursday morning as we embark on our journey back from an assignment in Nuu Division, Mwingi Central Constituency.

Travellers are early to beat the school closing rush among other duties in Mwingi town and other parts of the county.  Our journey started at 5am and we had set ourselves to report to office by 1pm, little did we know that this would be an unachievable dream.

The journey in a Public Service Vehicle came to a halt at about 7:30am when our vehicle approached Enziu seasonal river, located two metres off the Thika Garissa Highway. The river had been impassable and vehicles were forced to offload their passengers as they waited for the waters to reduce.

Restless passengers then took a rest at the banks of the river, watching as the waves waved across the river that has no bridge. A police vehicle with armed soldiers was also among the stranded vehicles and they, too, helplessly watched the rescue men test the depth of the waters.

This has been the trend in the past few weeks as passengers, students, exam officials, police and medical officers get stuck at the river, paralysing their operations.

David Kimwele Kitavi, the leader of the rescue team shares his experiences on the work he has done since 2010.

Kimwele was born in Mathyakani Village, Nguni Location, Mwingi Central Constituency. The father of two is a farmer among other menial jobs. “I do any work including offloading vehicles and any menial jobs. When it rains, we get this new assignment where we help people and vehicles cross the river,” he said.

Kimwele disclosed how he is determined to help people through what he says is as a result of the government’s failure to carry its responsibility-of building good roads for the locals.

The 33-year-old explains how he does his job: “Kama ni matatu kubwa, napima na magurudumu. Gari kama ile, huwa napima na mkono ili kuona kwamba exause pipe haiwezi kunywa maji. Nikiona kuwa kiwango imefikia vile inastahili, nauliza dereva avuke. Kama haiwezekani, nambwambia atulie (I first test the waters for the matatus before I can ask them to go in. If the waters are still deep, I ask the drivers to hold on until it is safe to cross.”)

He earns Sh100 per vehicle by testing the depth of the waters. On average, Kimwele makes between Sh800 and Sh1,000 by helping people through the water. “Kama uko na haja huu upande mwingine na hauna hiyo soo moja, hatutakudhulumu, tutakusaidia tu. Ukinipa soo moja au hamsini, ni sawa. Ukisema hauna pesa na uko na haja, tunakusaidia tu. (If one has an urgent need on the other side of the river and does not have the Sh100 or Sh50, we just help them.)”

In the middle of the interview, an expectant woman who is in a hurry shouts for help as she wants to cross to the other side of the river in order to access medical services from the nearest shopping centre which is about 3 kilometres away. Kimwele dashes to help the woman and asks her to climb on his back and in about two minutes, they are on the other side of the river. 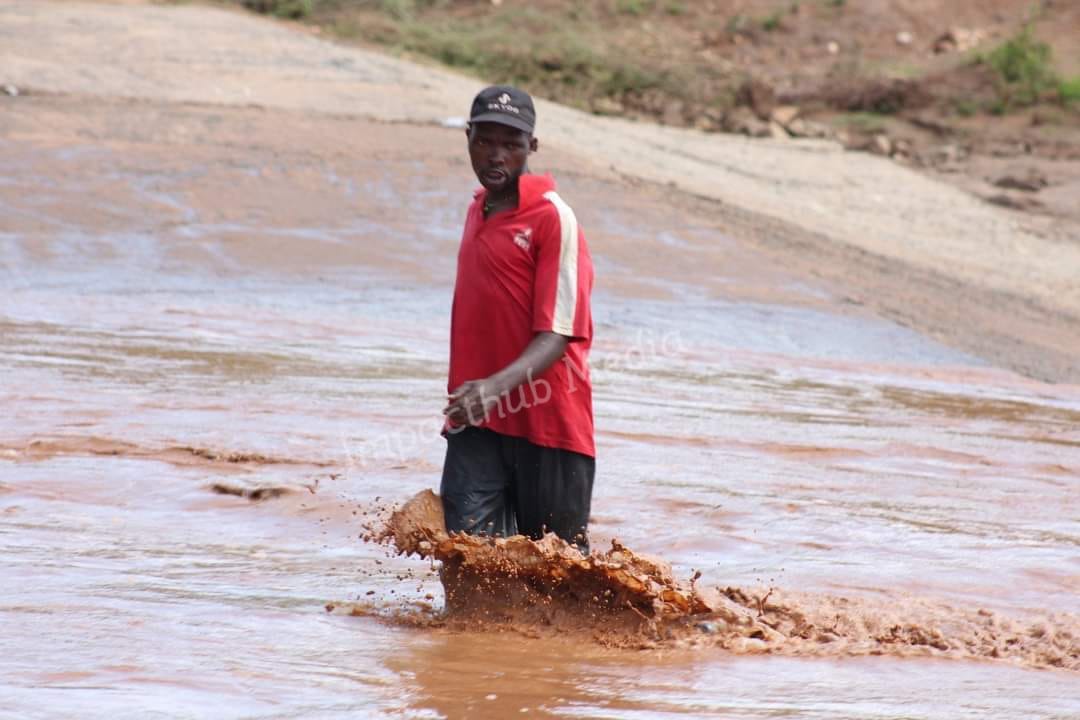 Born and raised in the area, Kimwele says none of his friends have ever drowned in this river despite the fact that over 300 lives were lost here in the 1997 El Nino rains.

On an ordinary rainy day, Kimwele’s assignment begins as early as there are motorists or pedestrians on either sides of the river who need to cross. “Because I live near the river, it is easy for me to hear the rage of the water waves or voices of people stranded. I thus stay alert for any call for help,” he says. 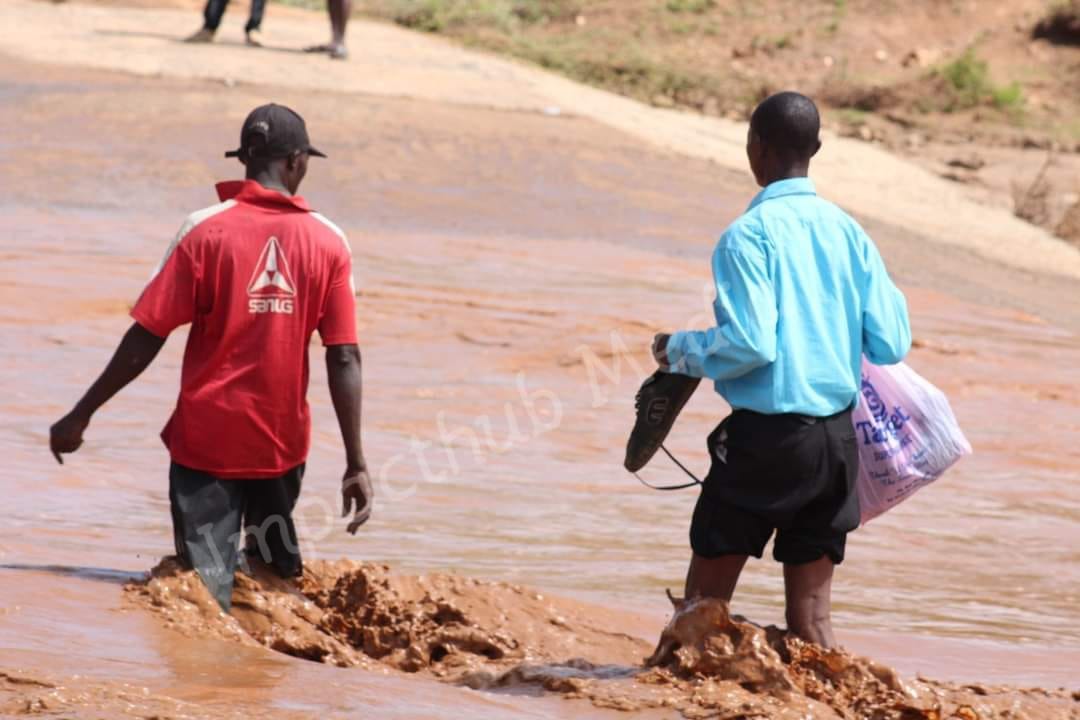 Last week alone, Kimwele rescued about 10 people who had drowned while crossing the river.  Last week, a middle aged man drowned here while crossing, carrying a sack of shopping. But midway, he drowned and Kimwele had to do the necessary. “Nilikimbia nikamtoa, kisha nikamkanyaga tumbo maji yote ikatoka. (I swum through the river, rescued him and stepped on his stomach to empty the water.)” “Those ones we do not charge, unless someone wants to appreciate,” says Kimwele with an heroic tone. 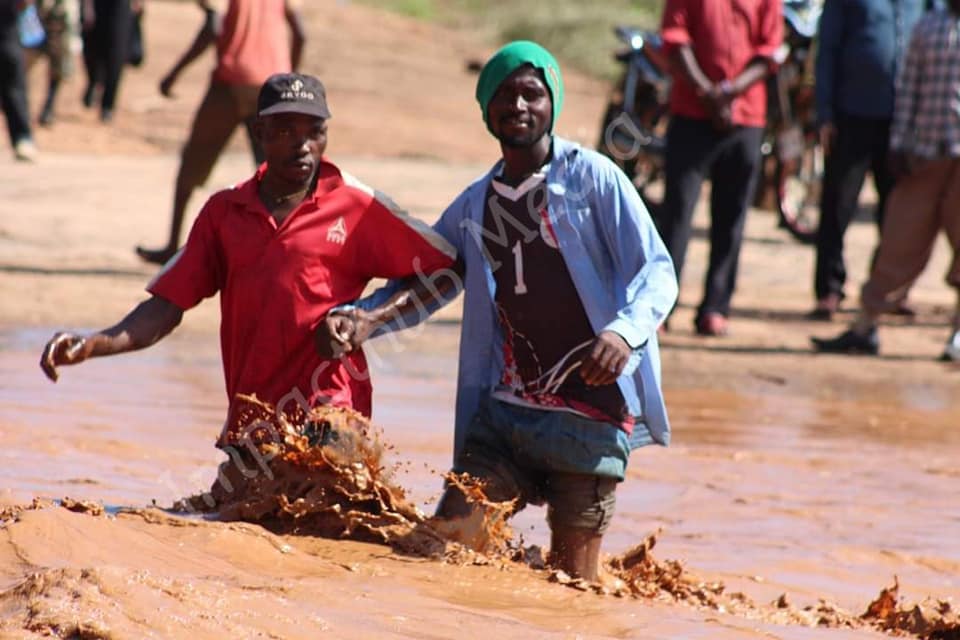 During the same week, another primary school teacher from Muangeni Primary school had drowned as he tried to cross the river at about 7:30 pm. Midway, the waves increased and he started drowning. “Since there is no electricity here, I asked one of the drivers of the stranded matatus to light the path for me and I floated on water to rescue him. As it is the norm, I brought him out, stepped on his belly and the water was out. Today, he is back to class until yesterday when schools closed,” he added.

On how he learned the technique of rescuing people, Kimwele says he heard part of this from the elders as well as his experience, having grown up a few metres from the river. So far, he has trained six other young men who help in the rescue operations. “When you get inside the river, you do not lift your feet. You drag them and when you feel that the water waves cannot allow you to drag your feet any further, I advise them to turn back until the water lowers.”

How we turn GBV survivors to great souls