Sarah Adero, a mother of four collects several pieces of human waste hair and straightens them before lining them into a machine.

A few minutes earlier, she had just returned to their workshop in Mamboleo in Kisumu after spending the better part of the day raiding dustbins in salons to collect used weaves, braids and wigs.

She carefully, uses the machine to weave strings from the collected used human hair in a process that takes several minutes as she hopes to transform the wastes into something meaningful.

She is among several women in the area that have seen an opportunity to innovate from the huge pile of wastes in the beauty industry where women and salonists have been carelessly disposing waste human hair.

Salons in the lakeside city always dump the wastes after removing them from their clients with the waste human hair contributing to pollution of the environment. Some of them are washed into the lake and thus threatening aquatic life.

The situation is even worse when the waste human hair involved are made of plastics. With Kisumu producing more than 400 tons of waste every day, authorities claim that used human hair form a huge part of the wastes.

A number of salon operators admitted to People Daily that they have never been keen on the impacts of the waste human hair on the environment but admits that they are pollutants.

And it is against this backdrop that Adero and several other women keen on environmental conservation have opted to raid dustbins and dumpsite to collect waste human hair.

For Adera, she admits that the love for women to change their hairstyles frequently and dump the ones they have used contributes to environmental pollution.

“We thought of how best we can turn the used weaves, braids and wigs into something useful after witnessing how they contribute to environmental pollution,” she said.

In their conservation efforts, the women have mastered how to transform the waste human hair into mats, carpets and textiles. They later sell the items and earn profits from them.

A spot check at the workshop where they work yesterday found out that the women had already made more than 10 carpets and doormats this week alone. Adero says that the conservation efforts have come as a blessing to them. “We are saving the environment from unnecessary pollution and at the same time we are also earning an income from the venture,” she explains.

The prices of the carpets vary with a small doormats going for between Sh500 and Sh2,500. Their clients include various residents in Kisumu and in other towns.

According to Adero who is the group’s chairlady, they decided to venture into making the door mats using wastes from the barber shops and saloons. 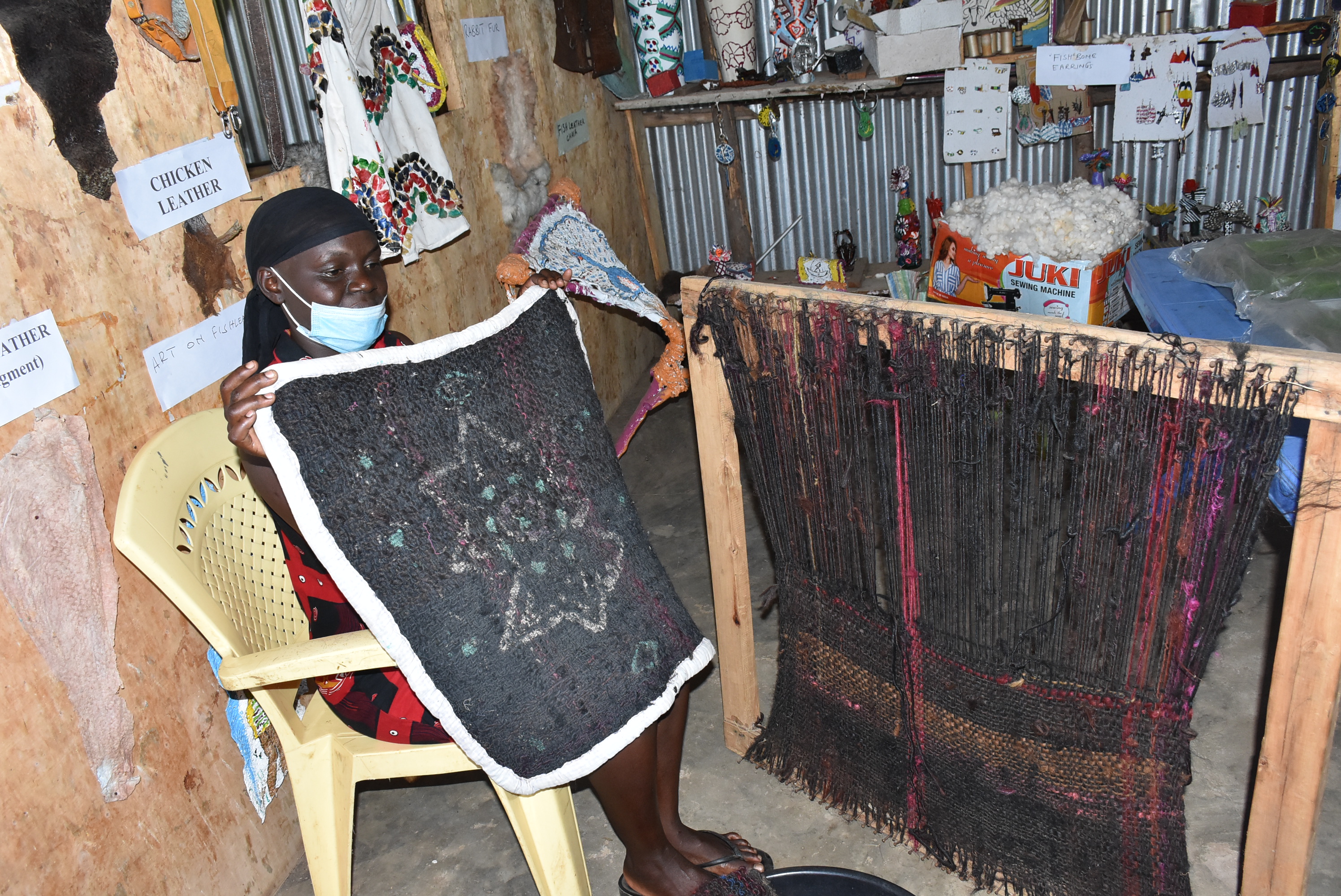 She says opted for that because of the spirit of the blue economy where we felt that there are some components of pollutants that end up in the lake thereby blocking the lake.

“We, a group of 7 women, we collect and use hair products from women which contains chemicals that when they end up in the lake, they pollute the lake and threatens aquatic life,” she explains.

She says they felt that it is important to bring the salonists together and make them understand that whatever they are releasing in the environment is toxic.

The mother of four says that she has been able to make ends meet through the initiative, adding that the other women she is working with are also able to cater for their families from the proceedings of their conservation efforts.

“I never knew that the used human hair could be turned into something useful like this, “she says. She is not alone, Juliana Awuor told People Daily that within a week, she can make at least 3 mats. She says it is the money that they get that she uses to pay for her children school fees and also sustain her family.

Rose Atengo on her side said that the mats they make can be washed whenever they get dirty and that they are long lasting.

According to Newton Owino an environmentalist who has been mentoring the women on the initiative and is the brainchild for the project, the conservation effort has been a great eye opener for the women. 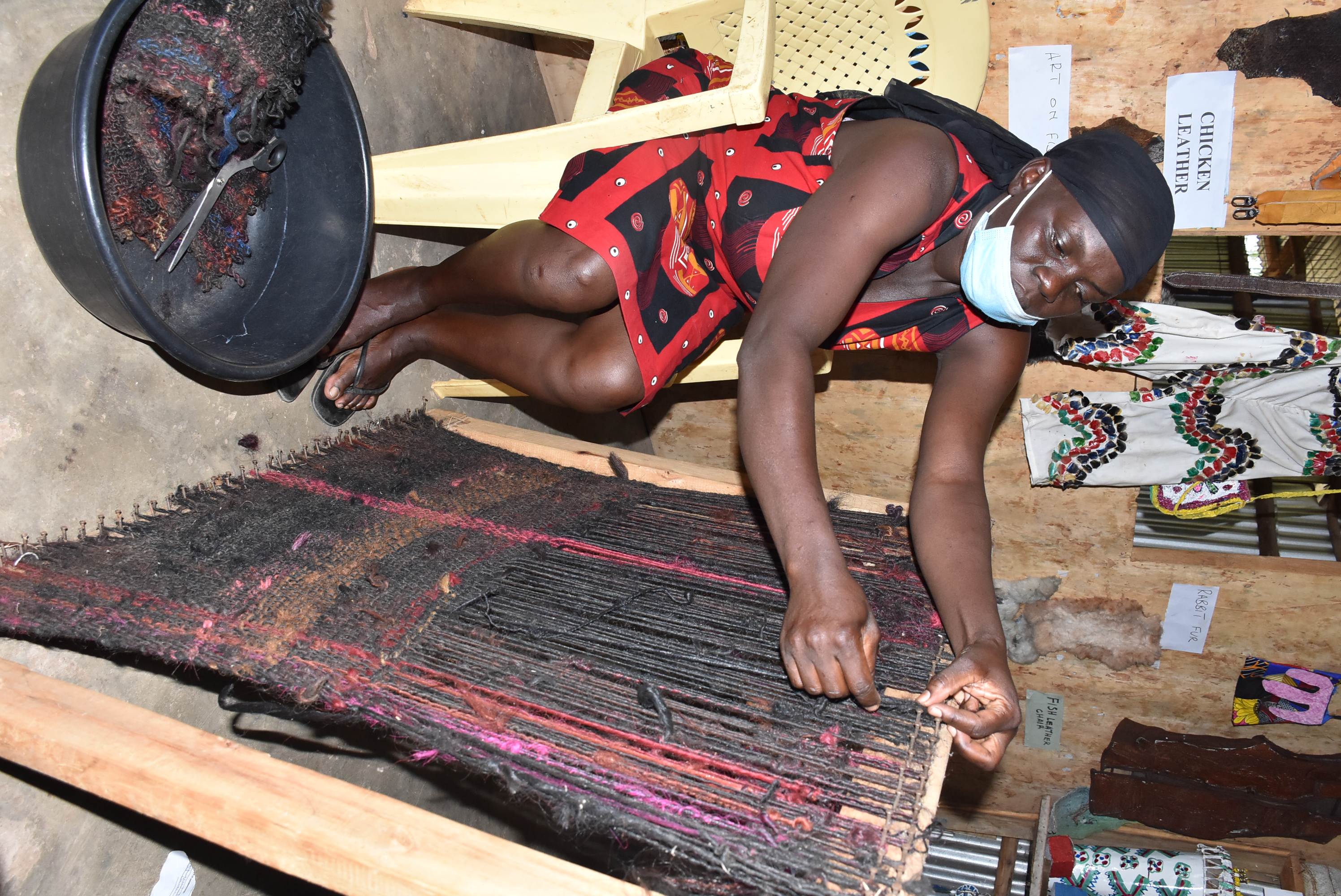 Owino said that they decided to fully venture in the business after realizing that the human hair are major sources of pollutants into the environment.

Michael Nyanguti, an environmentalist and the Chief Executive Office of Magnum Environmental Network decried the high rates of pollution in Lake Victoria.

Some of the plastic wastes from salons are swept into the lake after being dumped into waterways.

“If we could find a way of preventing plastics from entering the lake and filter them using nets along the waterways, we would protect the lake,” he said.

He noted that rivers emptying their waters in the lake that are also heavily polluted with plastic wastes are also hurting the lake and aquatic life.

In the region, heavily polluted rivers such as river Nyamasaria and river Kisian have been emptying all manner of wastes in Lake Victoria. Residents have staged protests over the pollution of the river by some industries.

According to Christopher Aura, a researcher and the Deputy Director Freshwater System at Kenya Marine and Fisheries Research Institute (KMFRI) some of the plastics break into micro-plastics and have adverse effects on aquatic life.

Aura advised the saloonists not to dump the wastes but to instead put them in a strategic area for possible recycling.
He says that the human waste should be treated the same way the National government is proposing that they be recycled just like plastics.
When dumped into the lake, he says that the plastics closes the water ways and denies fish chance for breeding.
He revealed to us that non degradable plastics normally loose some parts of plastics which may take many years to discompose. “When plastics or human hair gets into the lake, they end up in the lake bed and gets stuck there and in the end when one drinks untreated water from the lake, their digestive system will be damaged,” he said.