Despite the government’s efforts to sustain the elderly people in the country through the cash transfer program, a large number of them are still wallowing in poverty living in solitude.

A visit to some of the homes in Murang’a paint a grim picture of the dejected lives that the elderly people have been leading. Some even go for days without eating and rely on any well-wisher who will pass by to check on them.

A middle aged woman however has come to the rescue of these elderly people and she has taken it upon herself to look after the aged from their homes. Joyce Mumbi, a driver attached to Murang’a district hospital has been traversing various parts of the county paying visits to them.

Being an ambulance driver, she has to strike a balance in dividing her free time between her family and visiting the elderly. Through her initiative dubbed ‘kumbuka wazee innitiative’ Mumbi mobilizes resources from well-wishers to help cater for the needs of the aged. Most of them, she says, lack decent shelter, clothing and food which are basic for human survival.  “They know me as their savior such that even if they fall sick I have to go pick them up, take them to hospital even if it is at night” she said.

According to her, the society seems to have a negative perception towards the elderly people thus it rejects them. “Our people no longer appreciate the elderly as it used to be in the olden days and the value attached to them is long gone” she said. Some people, she says, see the elderly people as a bother as they require special care especially if they are sick and need someone to stick by their side.

“Many people don’t like associating themselves with the elderly people and only the lucky few who have their family to look after them are happy” she added.

“Some of the elderly people I have come across have no relatives and I become their family.  We have buried several in the public cemetery because they have nowhere to call home.” she said. She pointed out that family disputes and rural to urban migration are the two major factors which have led to the abandonment of the aging parents.

The government of Kenya launched a cash transfer program in 2007 aimed at cushioning the vulnerable in the society targeting the elderly, people living with disabilities and the orphans. The beneficiaries get Sh2,000 monthly stipend to help them meet their basic needs. The money is channeled through the ministry of Labour and social protection.

Josephine Wanja , 75, was chased out of her matrimonial home after the death of her husband three years ago. She had nowhere to go and was wandering in the villages in Kambirwa until one of the residents reached Mumbi and told her about the granny. Mumbi rented a room for the granny where she has been staying and often when she finds time she goes to check on her.

Njeri says she is lucky to have met Joyce who rescued her from misery and she can afford a smile. 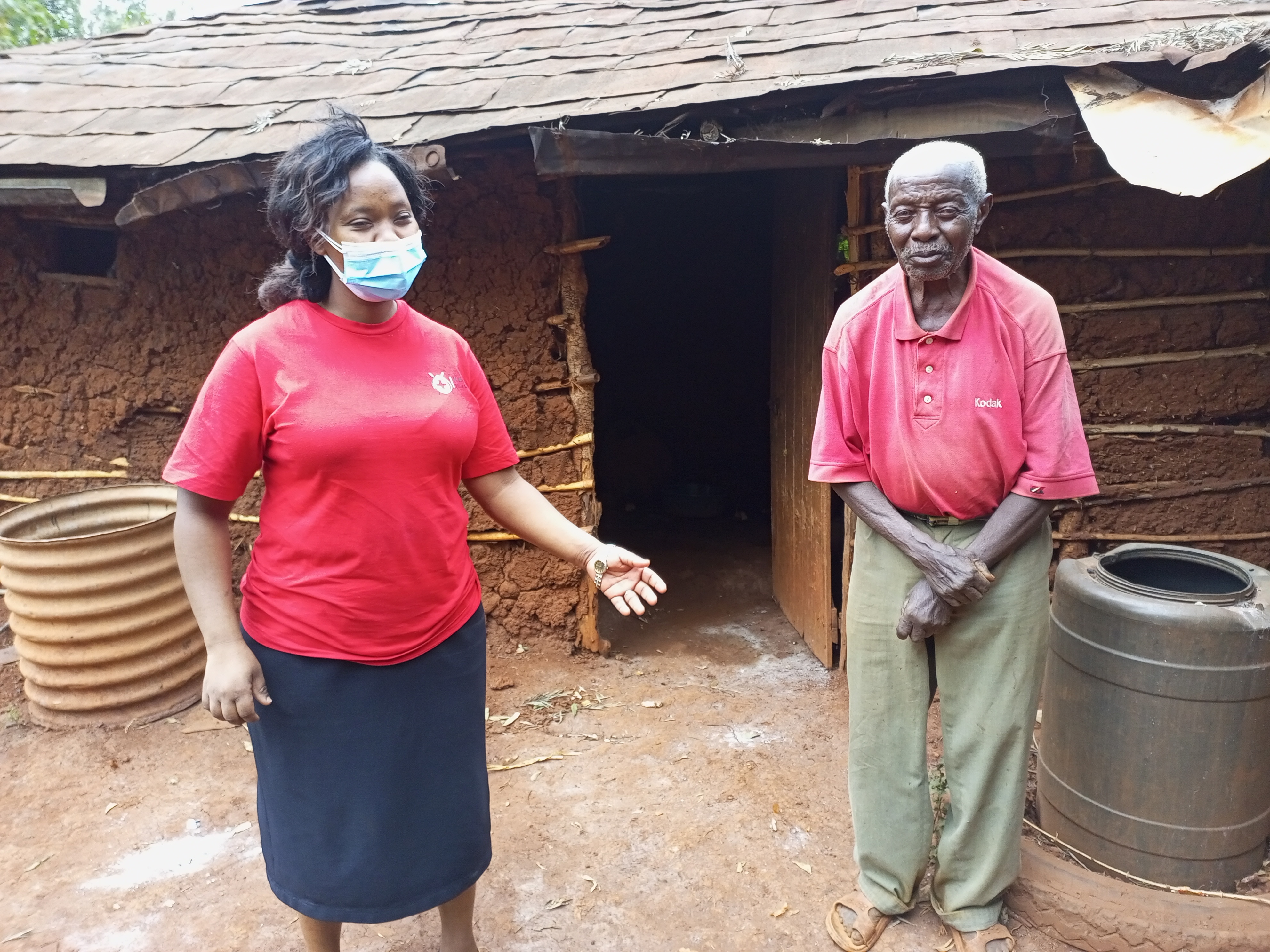 “I have a place to sleep and I get food daily courtesy of Mumbi, she has been of great help to me” she said. Joseph Kamau  85, has been living in solitude after the death of his wife a few months ago. She says the wife was his greatest companion despite the challenges they were facing. Having no source of income made them lead a miserable life and even getting food was a challenge.

Kamau is grateful after a neighbor introduced him to Mumbi who has not taken up the role of checking up on him and providing him with food. He says though he has eight children none of them has the capacity to look after him during his twilight years. His house is in a deplorable state and the walls are almost collapsing.

“I am sourcing funds from friends to see if we can build a decent house for him and put a smile on his face” said Mumbi. Mumbi says she opts to visit the elderly at their homes because she has not been able to establish a center where she can confine them for better care.

“I once enquired about taking an elderly home to one of the centers and was told I have to pay Sh10, 000 per month which is quite high” she added. Her dream however is one day, she shall have such a center where she can take in the aged not only from this county but other counties as well.

Four years down the line, Mumbi she has been able to touch the lives of hundreds of elderly people though some have passed on. This has however not been without challenges among them lack of finances which makes it difficult   for her to meet the needs of the aged who depend on her for food, rents, drugs among others.

She also cites lack of political good will claiming in most cases when she approaches any leader for help they always assume she is doing so for political reasons. Some even go to an extent of insulting her. Mumbi says she has tried to reach out to the administrators to have them put under the cash transfer program as this would ease her burden but only a few have been enlisted.

She appeals to well-wishers to come forward and boost her efforts in improving the livelihood of the elderly people in the society.

3 months ago Impacthub Media
× Talk to us!